NONE LEFT ALONE! WE ARE ON TRIAL AS LOCAL COMMUNITY

They’ve done all they could to bury me, yet they forgot I was a seed.” – D. Christianopoulos

On June 9th -at the Thessaloniki Court of Appeal- begins the trial of 21 of our fellow-strugglers, for the case of arson at the Skouries construction site on February 17, 2013.

The arson of machinery at the Skouries construction site marked the beginning of an unprecedented campaign of prosecution against an entire society. Without pretext, the prosecuting mechanism turned indiscriminately against all citizens who actively participated in the movement against gold mining. Arrests, interrogations, detentions, disappearances into police headquarter basements, illegal DNA sampling and the creation of a database of personal genetic information, imprisonments in the form of preventive detention.
In March 2013, an army of fully armed men of the Greek Police invaded Ierissos, in search of suspects for the arson attack at the construction site of Skouries. It was obvious -by the scale and brutality of the police operation- that the entire society was targeted. A resisting society had to be broken for two reasons: firstly, to enable the uninhibited continuation of the plans of the multinational mining corporation, and on the other hand, to act as an exemplary deterrent to any further resistance.
In April 2013, special forces of the Greek police invaded the homes of two individuals -at dawn and by breaking down the doors- taking them into custody in front of their children’s eyes. Following a long interrogation process in Thessaloniki’s Police Headquarters -and not in Polygyros as procedure dictated- their preventive detention was decided. The state -once again- chose a violent and extreme strategy with an obvious goal to terrorize the whole of society and dismantle the social movement. Two more preventive detentions followed.
At that moment, it became obvious that the State acted in service of colonial multinational corporations and the cost was paid, and is being paid, by those who resisted and of course by our homeland. And when the State adopts the doctrine of “investments at any cost”, social struggles are criminalized and Democracy is directly attacked. The presumption of innocence no longer applies: whosoever resists “development” and “investments” is guilty. Evidence-based charges stop being the prerequisite for prosecution, opposition to extraction practices suffices to find oneself in detention centers, in hospital, in court or in jail.
This situation is not unnatural for a neoliberal government that unequivocally states that “investments will be protected at any cost”. On the contrary, for a political party that is self-defined as radical left, this situation should be the opposite of everything that constitutes its ideological existence. A year and a half since SYRIZAS’ assumption of power, the Canadian mining corporation Eldorado Gold has been granted one permit after the other and the local community continues to find itself in the position of being held accountable and prosecuted. The multinational corporation continues to destroy and the local community remains under a hostageship of prosecution. Let it be noted that this Canadian corporation has stated that it will attend the June 9th trial as prosecutor. Greatly surprising for a corporation, which makes sure to stress often that it in no way turns against the local community!
The appeal to legality is simply an evasion. Legitimacy is not a natural law, it is a human convention and can be changed. Governments change law in accordance with their ideological orientation: either towards the end of serving large-scale economic interests and corporations which lobby, extort, bribe – or towards the end of serving the benefit of society as a whole and public interest.
The social movement against gold mining in Halkidiki struggles not only against the destruction of the environment and predatory exploitation of common resources. It also struggles against all that which puts profit for the few above life of the many. And in this struggle none will be left alone.

On June 9th, it is not only 21 members of the struggle who are being tried, we all are. A whole society struggling for its existence is being put on trial. The support of these people, just as victory, is a one-way street. We will persevere until the final vindication of a just struggle and the salvation of our homeland.

On June 8th, we call for a protest-by-night in Aristotle Square, Thessaloniki
and the next morning we all gather together at the Thessaloniki Court of Appeal.

Struggle Committees of Halkidiki and Thessaloniki against mining 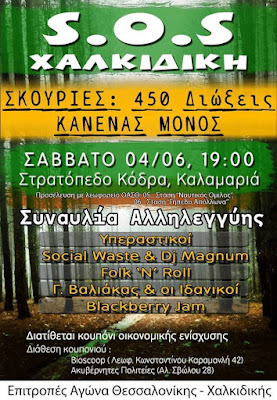 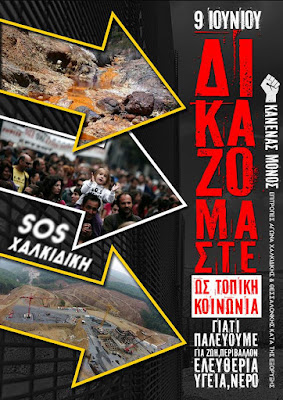 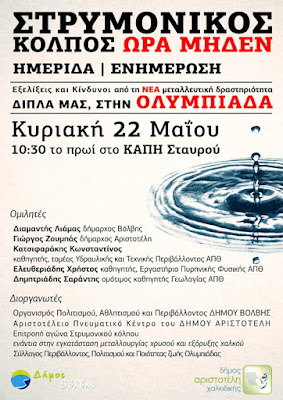 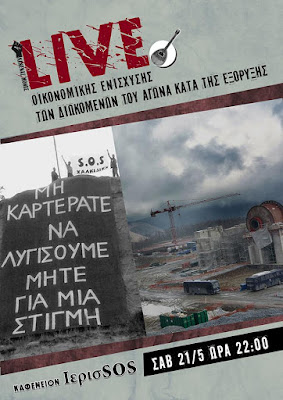 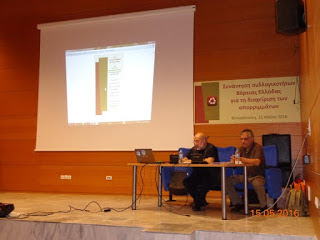 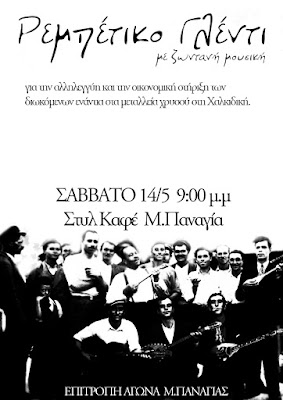 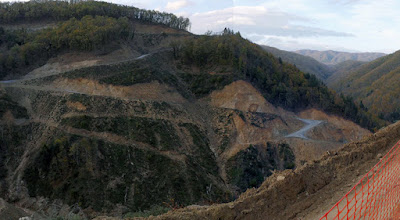 The Vancouver, Canada based "low-cost" gold mining companyEldorado Gold and its Greek subsidiary Hellas Gold are on the brink of turning one of the last remaining areas of intact old-growth forest in Northeastern Greece into a polluted industrial wasteland through their mining activities.

Greece's Syriza government had promised to stop the mining project, which includes the construction of a massive open pit gold mine in the heart of the Skouries forest, 3km upstream from the village of Megali Panagia in the Skouries-Kasteli-Kakkavos mountains. These mountains are the source of clean water for the entire region. Instead of stopping the project, the government has approved construction permits which allow the continued deforestation and eventual desertification of the area to advance.
If this mining project is allowed to proceed and should blasting begin, the Skouries open pit mine will produce up to 945 tons of dust per hour during the first three years, and up to 2,162 tonnes per hour during the next seven years, with a substantial risk of releasing heavy metals into the air. The existing economies based on tourism and agriculture are under serious threat of being destroyed by this ongoing environmental disaster.
Already in 2013, dangerous levels of arsenic were detected in the drinking water supply of the village of Neochori. In December 2015, 40 sheep died after drinking water from a contaminated stream flowing from the Madem Lakkos mine above the village of Stratoni. The results of an environmental inspection of the Skouries mine have just revealed dangerous quantities of asbestos in the air at site due to naturally occuring deposits of tremolite, which were played down in the initial environmental impact statement.
Archeological ruins of ancient mining villages have been unearthed in the middle of the Skouries open pit mine - if the mine is to become operational, these important archeological remains will have to be either moved or destroyed.
In 27 years when the company is gone, it is the taxpayers who will be stuck with a ticking time bomb of ecological catastrophe, should one of the tailings dams happen to break. The area is known for its seismic activity and there is a high risk that an earthquake could cause one of these dams to collapse, releasing a flood of toxic waste that will quickly reach the Mediterrean.
The only revenue the Greek state receives from this gigantic environmental mess is from the income taxes paid by the workers. As reported in 2015 by the Dutch NGO SOMO, Eldorado Gold uses a complex financing structure utilising Dutch mail box companies to avoid to pay taxes in Greece.
The people opposing this mining project in Greece face thousands of criminal charges for their protest activities.
The people of Halkidiki need support from the international community to put pressure on Syriza to stop the project and tell Eldorado Gold that their short-term profits are not worth the irreversible destruction they are causing to the future of the region and its ecosystem.

We Demand
To Paul Wright, CEO of Eldorado Gold:
- The immediate stop of all mining activities by Eldorado Gold / Hellas Gold in all of Greece
- A thorough and immediate assessment of existing environmental contamination caused by mining activity in Halkidiki and the creation and implementation of a remediation plan for contaminated areas.
- The development of a transition plan for workers currently employed by Hellas Gold - from mining work to reforestation and remediation activities.

To the Greek government:
Alexis Tsipiras, Prime Minister of Greece
Panagiotis Skourletis, Ministry of Environment and Energy
- The immediate dismissal of all criminal charges against anti-mining activists.
- The constitutional de-characterisation of the region as a "mining area".
- The protection of all archeological sites uncovered through Eldorado Gold's mining activity.
- Monetary and structural investment into the sustainable economic activities which already exist in the region, including organic agriculture, apiculture, and sustainable forestry and tourism.

To the Council of the European Union:
Jean-Claude Juncker, Presidency of the Council of the European Union
- A full and immediate investigation into the legality of Eldorado Gold's tax avoidance strategies via the use of mailbox companies in the Netherlands.
- Monetary and structural investment into the sustainable economic activities which already exist in the region, including organic agriculture, apiculture, and sustainable forestry and tourism.
For further information:
http://www.radio-schizoanalytique.net
http://epitropiagonapanagias.blogspot.gr
http://www.somo.nl/publications-en/Publication_4177
http://antigoldgr.org
https://soshalkidiki.wordpress.com 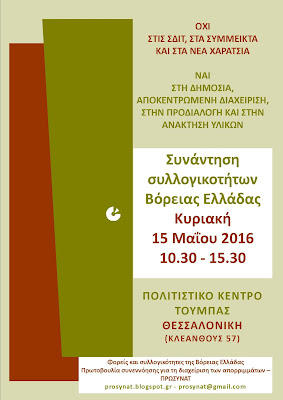