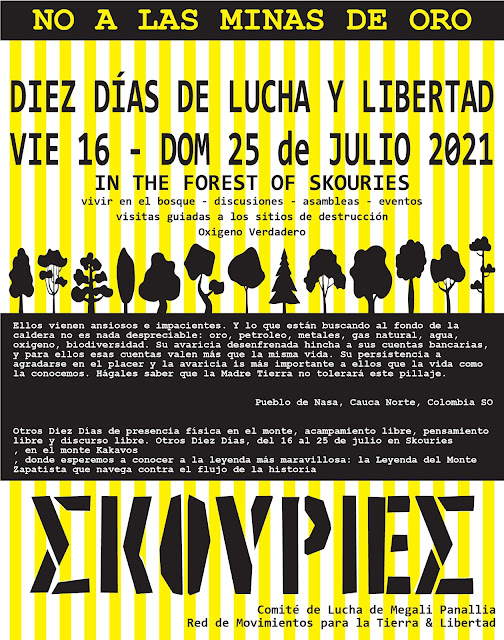 TEN DAYS OF STRUGGLE AND FREEDOM

They come drooling with eagerness. And what they seek at the bottom of the cauldron is not at all negligible: gold, oil, metals, natural gas, water, oxygen, biodiversity. Their unbridled greed makes their bank accounts swell, and to them these bank accounts are dearer than life itself. Their will to satisfy their pleasure and greed is more important to them than life as we know it. Let them know that Mother Earth will not tolerate this pillage. 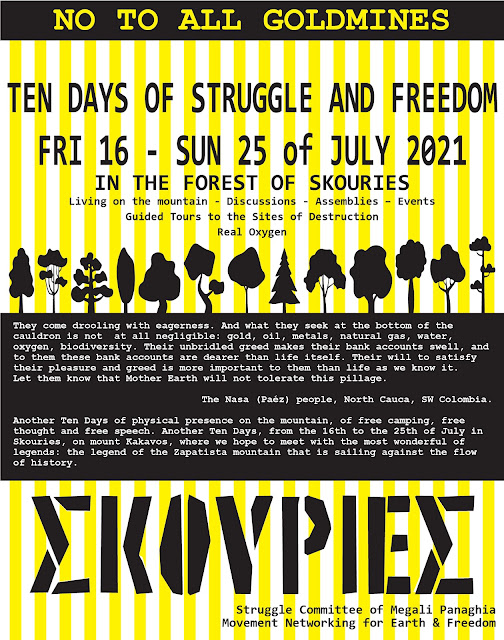 Summer 2020, summer 2021. In the year that passed with teleconferences and social distancing, apps, phone messages and complete social control, the distorted daily life of the lockdown paved the way for the emergence of a true "brave new world".

What about HEALTH? Health is now  one-dimensional, since they say there is only one global disease, and only when we eradicate it will we ever be able to reach “normality” again.

What about STRUGGLES? They are locked down… Struggles happen online, with security measures and social distancing, and “individual responsibility” as the highest ideal.

What about EDUCATION? It is internet-based, dystopian and generally remote, repurposed to allegedly set new goals and seek out new targets…

What about ZAPATISMO, the communities of struggle and resistance, society? It all sounds like an elusive dream…

Within this socio-political context, the dominant world system, capitalism, is being restructured and has already unleashed its new crusade, this time in the name of "energy transition", of "decarbonization" and of "climate neutrality". "Copper is the new oil," according to Goldman Sachs.

In this atmosphere of total social lockdown and contracting craze, the mountain peaks, from Crete and Agrafa to Vermio and Rodopi, are being leveled one after the other by wind turbines. At the same time thousands of acres of productive land are being deserted for the development of solar panel parks.

In a farcical media show, with government and company boldly lying about the creation of 4,000 new jobs and guaranteeing the absolute protection of the environment through stock market gambling and the New Investment Agreement, here in NE Halkidiki, we entered the new "investment period". We officially acquired the institutional status of a  colony.

So in order for the place to be saved, be it local, Greek, European, whatever, by the government of "excellencies" and "experts", dues should be paid to the master, to the Eldorado corporation and any Eldorado corporation. And under the new conditions, dues to be paid can cover absolutely everything. In the special economic zone of Skouries as it is now being established d by the new Investment Agreement and significantly supported by the new Labor Law, the company is recognized as the absolute manager, holder and owner of all natural resources in the area. There is no longer a specific “Investment Plan for the Development of the Cassandra Mines”, but a “potentially viable investment approach under development”, valid to the extent they see fit. This investment approach that concerns not only the hitherto allocated, well-known mining grounds, but the entire area consisting of ​​317,000 sq kms. The bosses, i.e. the company, owns not only the metals, but also the entire underground aquifer. A limitless amount of water can be used according to the company’s will, the company is answerable to nobody.

Archeological findings are no longer considered cultural heritage , they are but points in the "memoranda"  that are now being signed between the company and the local ephorates of antiquities. Biodiversity is not determined by natural ecosystems of beech and oak, it is the sum of elements that fit into the pots of Olympiada, now baptized “the largest flora region in the Balkans".

The municipal authorities are nothing more than decorative beggars waiting for a tip from the quotas of the mining fees and from what remains from the subcontracting  of the Corporate Social Responsibility projects of the company.

The workers’ strike is no longer a constitutional right, it is a negative "force majeure" against the investment and therefore is out of the question on the construction sites of Eldorado, as is any reaction, let alone movement protest, as provided by the new agreement. Any activity on the site is seen as conflicting with the interests of the investment, and will be prosecuted.

It seems, then, that 15 years of resistance and struggle against government dead ends, systemic arbitrariness and irrationality are not enough.

Skouries, mining, neoliberal labor contracts, the environment, still remain to be discussed by the movement. We have never stopped insisting that the need for organization and resistance is imperative. Our decision is firm and constant, feeding our network of movements for Land and Freedom, for the realization of another Ten Days of Struggle. Another Ten Days of physical presence on the mountain, of free camping, free thought and free speech. Another Ten Days, from the 16th to. The 25th of July in Skouries, on mount Kakavos, where we hope to meet with the most wonderful of legends: the legend of the Zapatista mountain that sailing against the flow of history.

"Mountains will not be turned into dust by the butchers of the planet." 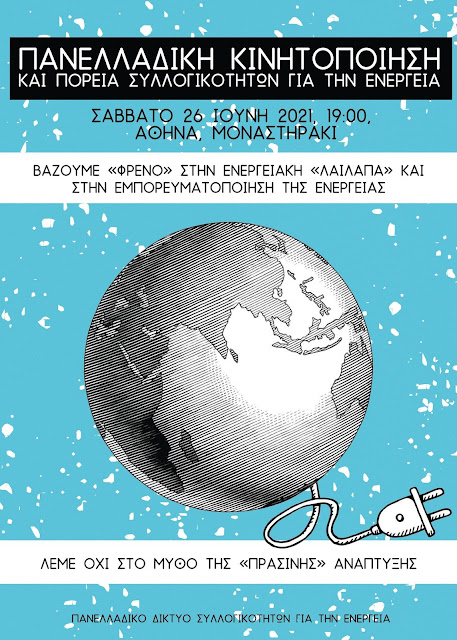