In this new situation, both on a national and an international level, the Committee of Struggle in Meghali Panaghia will organize the 7th 10-day meeting in the forest of Skouries. It is not only an urgent necessity for its members, but also for anyone following the attack of mining companies and the general assault against humans and the environment. 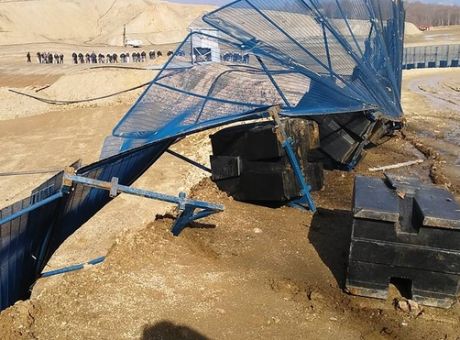 We are facing a political and economic system that has failed both financially and morally. Indivualism and total lack of community, total inexistence of society on the one hand, obsessively persistent economic depression on the other. Despite the several recapitalizations, the myth of growth at any cost had already revealed its limitations since the end the 2019. All mainstream analysts were just disagreeing about the exact moment of the official declaration of full-on bankruptcy.

On Greek territory, things couldn’t possibly be better under the government of ‘excellencies’ as they call themselves. From the monoculture of wind-farms and photovoltaic solar panels, a symbol of their new insane vision of development, to the combustion of garbage and waste dumps, from the unapologetic support and actual salvation of Eldorado Gold that was allegedly going to realize the grandest, and most destructive, investment in Greece, of course claiming no money from the Canadian mega-company, as the prime minster and his minsters themselves admitted, to the hysteria of oil self-sufficiecy and the craze of oil drills, there can be no better confirmation of the generalized impasse, of the filth of consumerism and the plastic culture of dioxins.

As for the political and financial scandal of Novartis, let us just say that it is proof of the greed and pettiness of those who are holding on to their parliament seats, as well as of the rapacity of big pharma.

To this adorable normality, if we believe the terminology of the government’s talking heads, the health crisis was added. Real or imagined, it does not really matter since a new global situation was created in its name. Scared, excluded people, bombarded by scientifically sounding data, infused with guilt by patronizing specialists and under the surveillance of the cops, the heroes of the moment playing a major social role. This was the best chance to sell all economic justifications to pass the “environmental bill”, to let unemployment skyrocket overnight from 17 to 22% and go unpunished.

This is how we see the situation unfolding before our eyes, and not only in Greece. We do not want to “return to normality”. We believe we should urgently organize and resist. Without waiting for the declared “acceleration of digital reform” that promises to give us back our jobs and wellbeing, but not quite yet, we are organizing our 7th 10-day meeting of struggle at the forest of Skouries from the 24th of July to the 2nd of August 2020.

For the substance and the success of our meeting the contribution of all those collectivities and individuals who do not accept the politics of delegation to professional politicians of their own affairs, who do not consent, who understand the danger, for both humans and the environment, of the assault by States and capitalism and continue to resist.