Unearthing disaster is a visual research project by Angela Anderson and Angela Melitopoulos focusing on the large-scale open pit gold mine in the forest of Skouries in Halkidiki, Northern Greece, and the ongoing anti-mining protest movements in the area, which together form a very complex example of contemporary “disaster capitalism.”
Since 2011, when a Canadian mining company received state approval for the construction of the open-pit mine and processing plant, as part of Greece’s “fast track” investment program enabling the accelerated and barrier-free licensing of large scale private investment projects, local communities have intensified their struggle against what they see as an ecological catastrophe and a threat to their own existence. 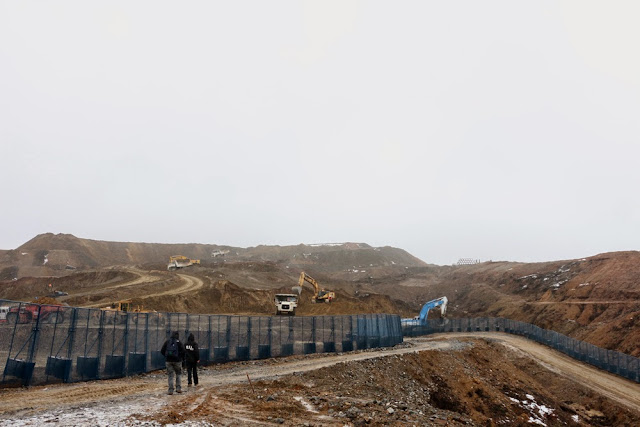 Unearthing disaster is not only about the dirty business of gold mining, but implies a catastrophe on different levels: the loss of memory, the loss of expression, and the violent calculated and destructive speed of a disaster capitalism that literally pulverizes the natural and cultural environment.

This unearthing disaster is put into motion as monstrous shareholder profit machinery; an assault that turns a beautiful and pristine environment into something that can no longer be recognized as an environment. Not recognizing the land you live in means not knowing how to relate to it. So in Halkidiki the struggle against the destruction of the territory because of goldmining is a struggle for expression. This destruction of landscape of old forest, pristine sea and beautiful aquifers is first of all a destruction of memory, and the implementation of politics that aims to disable our capacity to act.

Gold mining is not only a vicious consequence of the debt crisis but a form of anti-production. It destroys more than it produces. It takes place for the price of a dubious idea: that of gold——a not very useful element of the earth in which we store financial value and add the idea of infinity or divinity.

The screening of Unearthing disaster (2013) will be followed by a discussion with Angela Anderson and Angela Melitopoulos mapping out the complex situation in Skouries and the various forces, ethics, histories, and materialities that are currently at work there. Anderson and Melitopoulos are currently working on a second film about Skouries, which will be screened at the Thessaloniki Biennale this summer.